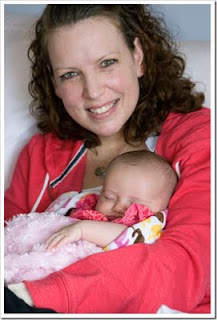 When I met Sara in 2008, I was a mess. My husband and I were separated. I was living with my sister in NW Indiana, while my husband and and sons were in a St Louis suburb.

I was living with chronic pain and had been for years. I could not understand why my husband and family were not empathetic or understanding, and no matter what I did it never seemed enough. I had pushed my body to the point that I could not even take care of myself, let alone my sons. I was deeply ensnared in the abyss of self-pity.

And then I met Sara. I was new to social media. To Twitter and Facebook. Through Divine intervention and seemingly random connections, I met my Sweet Soul Sisters; Tammy, Alece, Jenni, Cathi and Sara. Let's not forget Matthew Paul, Chad, Mark, Pete, Blake, Anne Marie and all of the folks at Crosspoint.tv. Each and everyone of these people would have a profound impact on my life and still do, but it was Sara who changed my life.

I remember very clearly the first time I read her blog. It was called "A Week in The Life", and it was a brutally honest series of posts about her life, her autoimmune disease, Ankylosing Spondylitis, and what it is like to live every moment of your life in your home. Being allergic to the very air we breath and take for granted. The amount of medication she took on a daily basis to just live astounded me. Yet, the most amazing and impactful thing about Sara was how she chose joy and was completely grateful for what abilities and amenities she still had. Her faith and trust in God was unlike anything I had ever seen before. Sara gave me a true picture of what it means to be a faithful follower of Christ.

The more time I spent with Sara on social media, her blog, and CPTV, the more I realized that I had that same choice. I found that my diagnoses did not define me and even though I was in pain all the time, I didn't have to live like I was. I could choose joy. And I did. I still do every day.

This gift that Sara gave me is one that I will forever be grateful for and will share her story until my final breath. This book is a reminder of her voice, when choosing is hard, That "no moment from my God is a rock of burden. it's just a rock waiting to be broken apart into stepping stones." 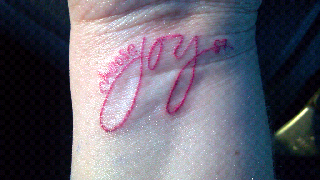 Some Days You Just Gotta Dance


When the kids are out of control and you want to hide in the closet with the jar of Nutella and a spoon.

Or your boss is on his 52nd tirade of the day.

And stressed out has become your permanent status on facebook.

When regular exercise or a trip to the gym just does not appeal to your senses...

You have an alternative.

It's time to DANCE!

Go ahead, release those endorphins!

ps...for those of us who are conscious of the health benefits associated with a healthy diet and regular exercise, 30 minutes of dancing (general) burns 233 calories.

pss...for assistance tracking my caloric intake and exercise, along with managing my goals, i use http://myfitnesspal.com, which also has a smart phone app as well.
Posted by Pamela at 12:45 PM 2 comments:

By five months and twenty days...to be exact.

And to be honest i really have no reasonable excuse, although i do have some really valid explanations. On December 16, 2012, the world as i know it came to a screeching halt. My husband of 21 years informed me that he wanted a divorce. Two days later he told me there was someone else, then he proceeded to move in with her.

To be brutally honest, i was not shocked that he wanted out of the marriage. We had been separated for nearly four years and had been able to be reconciled, yet i knew over the past four to five months things were not as they should be. I could feel the apathy and lack of intimacy in general.

I was totally unprepared for the announcement that he was seeing someone else. That piece of information was devastating, and completely unexpected.

Initially i was so angry that i blamed him for the entire break up. Everything was his fault.

"If he hadn't been having a relationship with her, then we would still be together."

Which is what brings me to my one word 365...SUBMIT...my role in the destruction of our marriage and many other relationships is my inability (or refusal) to submit. I have always been a bit on the rebellious or defiant side or the spectrum. These are just a few of my favorite fighting words;

"You are not my father!"

"I can do whatever i want to!"

"Why do i have to respect your boundaries when you don't consider mine?"

What i forgot all about was that the relationship was not just about me, or my feelings. When we enter into a marriage or a relationship, friendship or whatever the case may be, we are supposed to submit to one another in love.

"Now as the church submits to Christ, so also wives should submit to their    husbands in everything." Ephesians 5:24

"Submit to one another out of reverence for Christ." Ephesians 5:21

Admittedly, being unable or unwilling to submit is one of my biggest struggles. It is also the biggest thing that God is dealing with me on at this point in my life. I recently destroyed a very good friendship, one that had the potential of becoming more, because i could not honor his boundaries. I could not honor them because they reminded me too much of my husband, which in turn reminded me too much of my father, which is another story altogether.

I am not okay with this.

I am broken by the loss of this friendship.

So it is out of love and respect for this friendship that i vow to work even harder to figure out and learn how to submit to the ones i love.

Not because it is a form of punishment.

Or it means that i am less than them.

But because it shows them they are more.

Can You Hear Me Now?

This is a test.
It is only a test.

You may now resume your previously scheduled activities.

God is speaking these words into my heart today. What is He speaking into yours?

Choosing Joy,
Pamela
Posted by Pamela at 10:39 AM 2 comments:

Where One Word 365 and People of The Second Chance Collide

It is so hard to believe this year is already more than half over.

The days have flown by like a leaf on the wind.
Gone, but not forgotten.

I have been thinking about my One Word 365 choice for 2012 a lot lately. Even more so today following our conversation last night on the People of the Second Chance live chat on twitter.

The questions asked by @potsc have really coincided with how I am listening to God and He has been speaking to me.

Have you ever been betrayed? #potsclive
Expand

For me, I cope with most things by listening to music. Ironically, that's usually when I hear God speaking to me the loudest.

One of His largest megaphones for me is Matthew West. There is some connection between his lyrics and my heart experiences, that God has used to get me through some really tough times. He is truly using his talent as an instrument of God.

Most memorably, one Wednesday evening after volunteering with our teen youth group, I was driving home and listening to a MW compilation CD (gotta love itunes) when the song "All the Broken Pieces" came on.

It had been such a wretched day.

At that point, Shawn and I had been separated for about 2 1/2 years. He had not let me see the boys in nearly a year.

I was missing them terribly.

I was wrecked when I heard this song.

"Are you telling me everything is going to be okay?"

I kept hitting the back button and playing the song over and over again.

When I finally let the next song play, (keep in mind it was on random play AND a compilation CD)  the song that followed was

"Just a face in the city


Just a tear on a crowded street


And I want you to know

That I'm not letting go
Even when you come undone

I love you more than the sun


And the stars that I taught how to shine

Okay. So I may not be a rocket scientist, but i'm pretty sure that was a sweet word from my God.

And I don't know about you, but I'm gonna keep on listening for more.

How are you hearing from God? Would love to hear your thoughts on this.

pss... I am building my confidence to share my story at www.potsc.com so prayers would be greatly appreciated. :) P
Posted by Pamela at 12:19 PM 2 comments:

I can't believe I finally did it! I completed my externship hours. Saturday was my last day.

My final task is to have an exit interview, then I will be an official graduate.

This should take place before Friday morning.

It has been quite a year. One that I could not have made it through without the love and support of my awesome husband, crazy flexible kiddo's, my family, especially my mother-in-law, Loretta, and sister-in-law, Stephanie. I love you all more than you know.

Lets talk about how encouraging my twitter and blog friends have been. Uh-may-zing!!! Could not have done it without you. (not mentioning any names, but you know who you are!) I love and cherish you and your friendship...each and every one of you.

To my Instructors who have gone way beyond what is even rational to see me succeed. Thank you just does not seem adequate.

Last, but certainly not least, the mercy and strength of my Lord and Savior. Without whom, i am nothing. Thank you more than words.